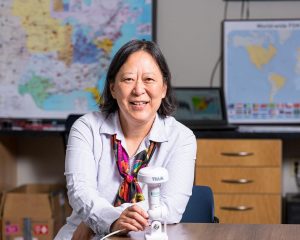 The talk will introduce the research of power grid wide-area monitoring and some fascinating observations that were made possible from the grid edge synchronized data. The critical roles of wide-area phasor measurement in situation awareness, operation, and control will be discussed. The concept of electromechanical wave propagation in power grid will be demonstrated using measurement data collected from the actual grids. Applications of time synchronized data in event location, oscillation detection, model validation, and others will be discussed.

Yilu Liu received her M.S. and Ph.D. degrees from the Ohio State University, Columbus, in 1986 and 1989. She received the B.S. degree from Xian Jiaotong University, China. Dr. Liu is currently the UT-ORNL Governor’s Chair at the University of Tennessee and Oak Ridge National Laboratory. She is also the deputy director of the DOE/NSF engineering research center CURENT (curent.utk.edu). She led the effort to create the North American power grid Frequency Monitoring Network FNET/GridEye (fnetpublic.utk.edu, powerit.utk.edu). Dr. Liu is an expert in large grid dynamic modeling and simulations. Dr. Liu is a member of National Academy of Engineering, a member of the National Academy of inventors, a fellow of IEEE. She can be reached at Liu@utk.edu. 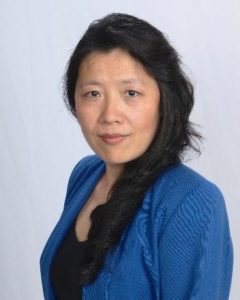 New Grid – When Past, Present and Future Collide

Dr. Jessica Bian is a visionary leader and architect. She has spearheaded electric industry’s reliability metrics and grid risk assessment. Currently she is the Vice President of Grid Services at Grid-X Partners.  Before that, she was with the Federal Energy Regulatory Commission (FERC), Washington, DC. Previously, she was the Director of Performance Analysis at North American Electric Reliability Corporation (NERC) in Atlanta, Georgia. Under her leadership, a total of 18 industry-wide reliability indicators were established to determine grid reliability, adequacy, and associated risks.  She is widely recognized as a pioneer and trusted world leader in the field. Before joining NERC, Dr. Bian was with PJM, ERCOT and Westinghouse Electric.  She earned her Ph.D. in Electrical Engineering from Tulane University and published over 70 articles. She volunteers at the IEEE Power & Energy Society (PES), and has been the Society Secretary since 2016.  This year she has been elected as IEEE PES President-Elect. 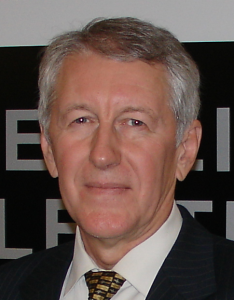 Optimal and unbiased state estimation in diverse environments is a key problem in many branches of engineering, such as navigation, indoor robot localization, communications, power electronics, etc. However, not each estimator is sufficiently robust when the model and environments are not well specified or undergo temporary uncertainties. This lecture presents the optimal finite impulse response (OFIR) and unbiased FIR (UFIR) state estimators, which are fundamentally more robust than the Kalman filter (KF). A comparative analysis for robustness is provided of the UFIR filter, which ignores the noise statistics and the initial values; the KF, which is optimal but not robust; and the H∞ filter, which is robust by design. The filters are tested for robustness against three main factors: imprecisely defined noise covariances, which exact values are typically unavailable in practice; mismodeling, which occurs when the model does not fit the process; and temporary uncertainties such as jumps in phase, frequency, and velocity, which cannot be modeled in view of the unpredictable nature. It is shown that under the ideal conditions, the KF produces best estimates, which cannot be improved using the H∞ filter. Provided that errors in the model are maximized correctly or overrated and the tuning factor is chosen properly, the H∞ filter performs better than the KF. But an incorrectly chosen tuning factor may bring the H∞ filter to instability and divergence. On the other hand, much smaller efforts are required to find an optimal horizon (a single tuning factor) for the UFIR filter, which therefore may be a better choice for robust estimation. A number of applications are discussed to show better robustness of the FIR approach.

Dr. Yuriy S. Shmaliy has been a full professor in Electrical Engineering of the Universidad de Guanajuato, Mexico, since 1999. He received the B.S., M.S., and Ph.D. degrees in 1974, 1976 and 1982, respectively, from the Kharkiv Aviation Institute, Ukraine. In 1992 he received the Dr.Sc. (technical) degree from the USSR Government. In March 1985, he joined the Kharkiv Military University. He serves as full professor beginning in 1986 and has a Certificate of Full Professor, since 1993. In 1993, he founded and, by 2001, had been a director of the Scientific Center “Sichron” (Kharkiv, Ukraine) working in the field of precise time and frequency. His books Continuous-Time Signals (2006) and Continuous-Time Systems (2007) were published by Springer, New York. His book GPS-based Optimal FIR Filtering of Clock Models (2009) was published by Nova Science Publ., New York. He also edited a book Probability: Interpretation, Theory and Applications (Nova Science Publ., New York, 2012) and contributed to several books with invited chapters. His discrete orthogonal polynomials are called Shmaliy moments. His iterative unbiased finite impulse response filter (UFIR filter) is recognized as a robust alternative to the Kalman filter. Dr. Shmaliy has authored more than 450 journal and conference papers and holds 81 patents. He is IEEE Fellow; was rewarded a title, Honorary Radio Engineer of the USSR, in 1991; was listed in Outstanding People of the 20th Century, Cambridge, England in 1999; and was granted with the Royal Academy of Engineering Newton Collaboration Program Award in 2015. He had been a visiting professor-researcher in City University London in 2015-2016 and in Telecom SudParis in 2015, 2017-2019. He currently serves on the Editorial Boards of several International Journals and is a member of the Program Committees of various Int. Symposia. His current interests include statistical signal processing, optimal estimation, and stochastic system theory.

This presentation will  talk about the bio-inspired metaheuristics and some of its uses in the solution of complex optimization problems. First, the term “metaheuristic” will be defined and will be indicated in a general manner how they fit inside the so-called “computational intelligence”. Subsequently, a particular class of metaheuristics that have biological inspiration will be described  and some examples of them will be given. The last part of the talk will provide some examples of real world applications of a particular kind of bio-inspired metaheuristics (the evolutionary algorithms).

Dr. Carlos Artemio Coello Coello was born in Tonalá, Chiapas, on October 18, 1967. He attended the degree in civil engineering at the Autonomous University of Chiapas graduating with an honorific mention that same year, he received the “Diario de Mexico Medal” for being one of the “best students in Mexico ”. Subsequently, he obtained a scholarship from the Ministry of Public Education to study masters and doctorate in computer science at the University of Tulane, in the United States, graduating in 1993 and 1996, respectively. Since 2001, he works in the Center for Research and Advanced Studies of the National Polytechnic Institute (CINVESTAV-IPN). Dr. Coello has been a pioneer in an area of ​​computing today known as “multi-objective evolutionary optimization”, which focuses on solving problems with two or more functions objective (usually in conflict with each other) using biologically inspired algorithms. His work deals primarily about the design of algorithms, several of which have been used to solve real-world problems in countries like the United States, Colombia, Chile and Cuba. Dr. Coello has more than 480 publications, which report more than 43,900 Google Scholar citations to date (his H index is 82). He has directed to date 74 theses (including 21 PhD), several of which have received awards. He is also associate editor of 8 international journals, including the 2 most important in its area and belongs to the editorial committee of 4 more magazines
Dr. Coello is the youngest computer scientist to have reached level 3 of the National System of Researchers (SNI) in area VII (at 37 years of age), and since 2010, he is a 3F Cinvestav Researcher (the highest possible category in the CINVESTAV-IPN). There are only 31 researchers (of 645 that CINVESTAV-IPN has) that have this category.
Dr. Coello received the 2007 National Research Award in “exact sciences” from the Mexican Academy of Sciences being, to date, the only computer scientist who has received this important distinction since it was instituted, in 1961. He also received the Medal of Scientific Merit 2009 from the Legislative Assembly of the Federal District. Additionally, he has been awarded with the Capital City Award: Heberto Castillo Martínez – 2011 Edition, in Basic Sciences, in the Mexican scientific and scientific category of 45 years or less. Since January 2011 is IEEE Fellow for his contributions to mono-objective and multi-objective optimization using metaheuristics. Dr. Coello received the 2013 IEEE Kiyo Tomiyasu Award for “Pioneering contributions to mono- and multi-objective optimization using bio-inspired metaheuristics”, which makes him the first Latin American to receive this important award.
He also received the Scopus Mexico 2012 Award, in the area of ​​Engineering, for its high number of publications and citations of the last 5 years, becoming the first computerist to receive this distinction, since it was instituted in Mexico, in 2007. It also received the National Prize for Science and Arts 2012 from the then President Felipe Calderón Hinojosa, in the area of ​ Physical, Mathematical and Natural Sciences. This is the most important prize that gives the Mexican government to a scientist and Dr. Coello was just the second computer scientist in receive it in the 67 year history of the award, being also the first one to obtain it in exact sciences. In December 2012 he received the National Socio-Humanistic, Scientific and Technological Research Award  2012 from the Autonomous University of San Luis Potosí. Recently he received the 2016 Third World Academy of Sciences Award in Engineering Sciences for “his pioneering contributions to the development of new algorithms based on Bio-inspired metaheuristics to solve mono-objective and multi-objective optimization problems.” 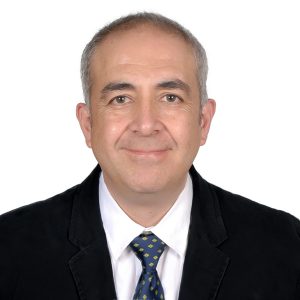 Challenges and Opportunities in the Next Generation of Electric Power Systems

The electric power industry has undergone dramatic changes in recent years driven by the emergence and increasing adoption of new technologies. These changes present new challenges for system operators, who must face greater complexity in the operation and control of the electrical infrastructure. This talk summarizes and discusses several technical challenges and methods to solve them associated with the increasing penetration of renewable energies, interdependence between critical infrastructures, cybersecurity threats and the latest advances of the role of state estimation in power system operation.

Claudio Rubén Fuerte Esquivel received the B.Sc. degree in electrical engineering from the Technological Institute of Morelia, Mexico, in 1989, the M.Sc. degree (Summa Cum Laude) from the National Polytechnic Institute, Mexico, in 1993, and the Ph.D. degree from the University of Glasgow, Glasgow, Scotland, U.K., in 1997. He is currently a full-time Professor with the Universidad Michoacana de San Nicolás de Hidalgo (UMSNH), Morelia, Mexico. His current research interests include the study of flexible AC transmission systems and critical infrastructures.
Dr. Fuerte has demonstrated his leadership as an educator and researcher, which has been recognized by the Mexican government by granting him the distinction of professor with outstanding academic profile. For his world-wide significant contributions in research, as his publication and citation records attest to, as well as teaching, projects and the promotion of research in Mexico, He holds the maximum appointment of researcher in Mexico and a membership in the Mexican Academy of Science He was also the main promoter to achieve a top IEEE-PES conference in Mexico after 31 years. Since January 2019 is IEEE Fellow for his contributions to modeling, analysis and operation of Flexible Alternating Current Transmission Systems.

Suscribe to our website and you will receive news about:

and last but not least, keep informed about all the activities around the International Autumn Meeting on Power, Electronics and Computing.